HELSTON RAILWAY are excited to announce that the Somerset & Dorset Railway Trust’s prussian blue liveried Peckett ‘Kilmersdon’ is joining our locomotive fleet for the 2018 season until early 2019. 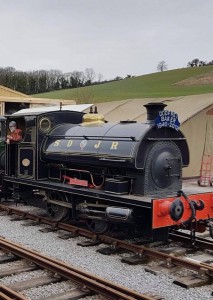 The plan of action is for ‘Kilmersdon’ to make her cornish debut during our popular Return the to 40’s event on the 27 & 28 May (late bank holiday) hauling the first steam passenger trains on the Helston branch in over 55 years!

There will be plenty of opportunity for people to ride behind ‘Kilmersdon’ whilst she is with us and we are presently creating a calendar of dates for when the engine will be in use.

Helston Railway Marketing Director Ben Harding comments “We are simply delighted by the news that the Somerset & Dorset Railway Trust have agreed to hire us this wonderful locomotive for the 2018 season. This doesn’t of course mean we have forgotten about our other locomotive ‘William Murdoch’. Work is steadily progressing on the final stages of the boiler repairs and then the engine will be re-assembled and tested, we will then be hosting an event with both Peckett’s in steam later in the year”

So if you want to be among the first passengers to ride on a steam hauled train on the Helston branch in over 55 years, be sure to be at our Return to the 40’s event this late May bank holiday!

Thomas
https://www.helstonrailway.co.uk
Thomas manages a web and design studio in Exeter, but is responsible for the build and upkeep of the Helston Railway website. He also takes care of the design and print of the regular Helston Railway Newsletter you may have through your door a few times a year. He started off volunteering at the Helston Railway from the age of 14 mainly clearing vegetation and general maintenance from the original base at Trevarno.
Previous Post A BR Mark 1 Suburban has arrived! Next Post Return to the 1940s confirmed for steam services return!