A BR Mark 1 Suburban has arrived! 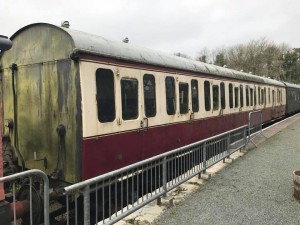 Following departure from the Buckfastleigh terminus of the South Devon Railway on Thursday, the coach made its way to Cornwall that day. After enjoying a night at the seaside in Marazion near Penzance the low loader set off early Friday morning towards Prospidnick Halt.

A few hours passed, a lot of shunting, pre planning and the coach landed on Helston Railway metals!

Ben Harding, Marketing Director for the Helston Railway comments “This is a major milestone reached in the railways development towards the goal of establishing a regular passenger service on the line. We are sincerely grateful to our friends at the South Devon Railway, for allowing us to have the coach on long term hire and also to the skilled crew of S.A. Smith, the haulage firm who provided the transport and the skill set to get the coach into the railway” 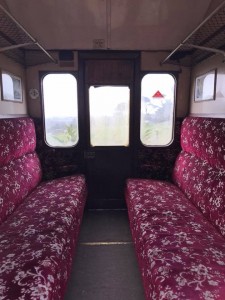 The interior of one of the compartments of the coach, prior to work commencing.

The coach will now undergo some minor work and a deep clean before entering service on the railway in the near future.

As a lot of readers of this article will know, moving large vehicles in and out of the railway was formerly an issue for us due to access restrictions beyond our control, however we have now got around this and it remains only to say… onwards and upwards!

Thomas
https://www.helstonrailway.co.uk
Thomas manages a web and design studio in Exeter, but is responsible for the build and upkeep of the Helston Railway website. He also takes care of the design and print of the regular Helston Railway Newsletter you may have through your door a few times a year. He started off volunteering at the Helston Railway from the age of 14 mainly clearing vegetation and general maintenance from the original base at Trevarno.
Previous Post Royal opening of Truthall Halt – Britain’s most southerly station Next Post SDJR ‘Peckett’ Heads for Cornwall!